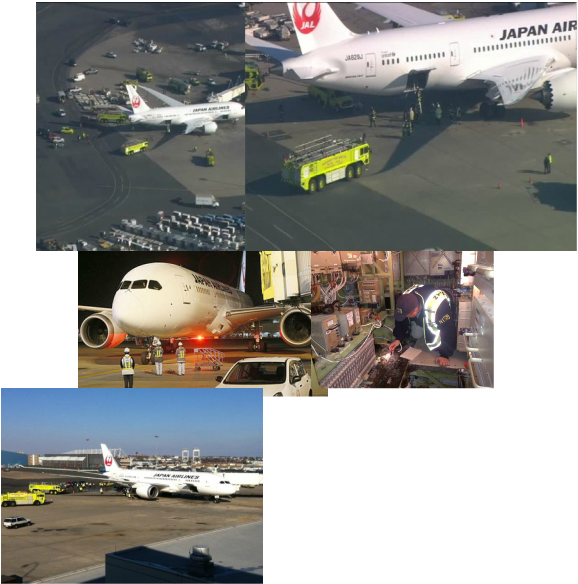 Excerpts from the story: The Japan Airlines plane, which had arrived at Logan Airport from Tokyo at 10 a.m., was being prepared for a noon departure at a gate when a maintenance worker noticed smoke and called emergency crews.

Batteries used to start the auxiliary power unit, which provides electricity for ground operations, are located in the small area in the belly of the plane.

The interest here concerning the fire in Japan airline plane is associated with the extraterrestrial intervention that has spared us from nuclear war. The intervention began long before the building of nuclear weapons.

I have been in contact with our elders for several years now, and they have repeatedly taken the steps to shut down nuclear weapons to protect us.

Did some reverse speech analysis of speakers associated with the emergency response to this plane fire. Here's some samples:
"Another Jew op here. They lost their rifles, armed with a pistol fist this time.
Sewerage, I'm cashing you when you fly.
There's something off in our brains.
Howard did this.
3 megaton.
Zoom missile.
The Martians are now looking out for us.
WE hustle financials.
Blunted spear.
~~~~~~~~~~~~~~~~`

Bitch interpretation: The plane is equipped with a built in 3 megaton thermonuclear weapon. The plan might go something like this: Have the proper passengers on board, insurance collections, some executives that hold significant property interests that can be converted when they lose their lives, and the rest of the ordinary people. Would the The large number of people killed in an event like this not help to disguise the targets?

The plane would be directed to a specific flight path over a highly concentrated area to insure large numbers of casualties. Area on the ground  would also have large insurance packages installed on properties there. A blast of the size of weapon installed installed would also allow for ghosting large numbers of the Israelis that have put it together.

It would put a martial law situation in to the country as an added side benefit.

The size of the weapon seems quite large, so it would have to have a fresh tritium trigger. Can we do some searches and locate nuclear power plants that have had recent visits from extraterrestrial craft "Marking" them?

The next story concerns what to Bitch looks like another attempt to plant a nuclear bomb in a major American city; Chicago. 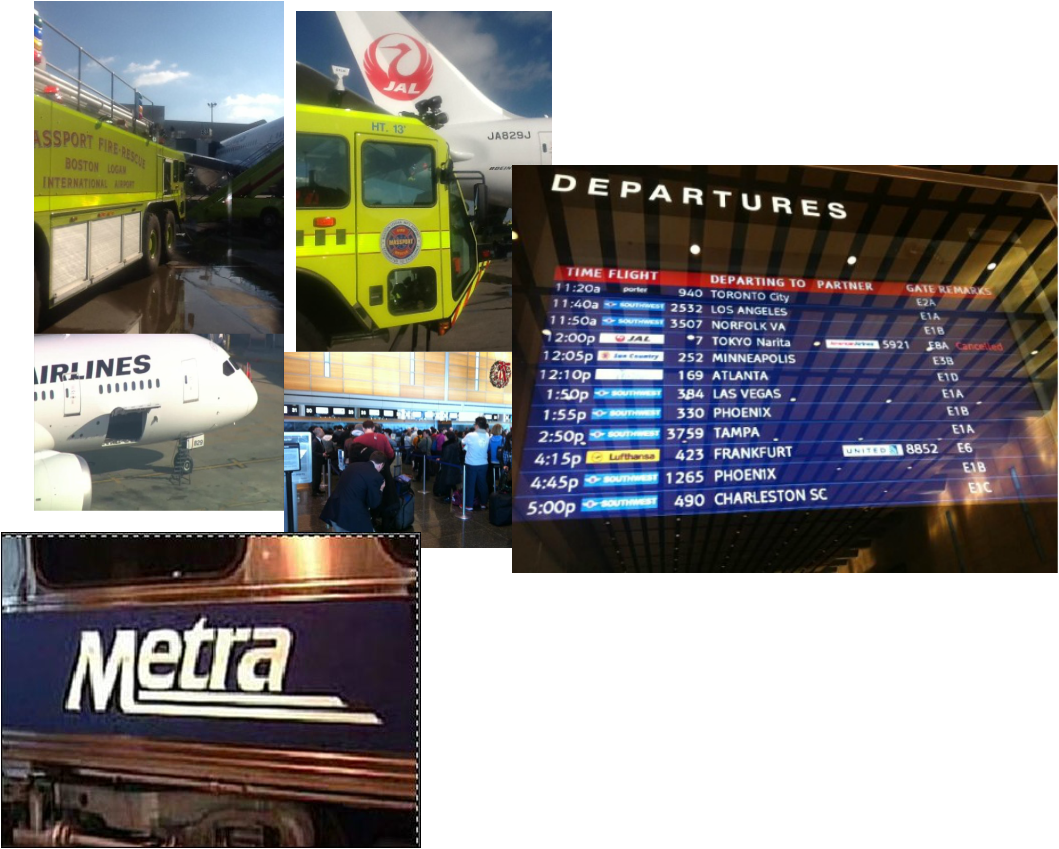 Metra Trains Delayed After Train Derails Downtown; No One Injured

Monday, December 24, 2012 7:26:46 PM
Mike Ramsey
(STMW) — Metra service was back to normal after a derailment downtown caused temporary delays on three different lines. No one was hurt.  Wheels on the second and third cars of the Metra train left the tracks, but all of the cars remained upright near 155 N. Canal St., just north of the Ogilvie Transportation Center.
~~~~~~~~~~~~~~~~~~~~

Bitch speak: The emergency report that was originally called in stated that all 6 cars of this Metra train had gone off the tracks and fallen on their side?
What could possibly cause such a report?

From thefreedictionaryonline. apparition - something existing in perception only

Have you seen the movie the planet of the apes? If so, do you recall the scene where a wall of fire appeared and blocked the advance of Charles Heston? Then after probing for a bit, they determined it was an illusion and proceeded on through. That as an illusion, an action on perception, is that not basically an apparition?

Can we ask ourselves if the report of the Metra train having 6 cars off the tracks  and on its side, something similar? Did the initial reporter have the perception installed into their eyes that they saw 6 cars on their side?

Was this a way for our elders to help us separate an ordinary event from one that we should be looking into? Did that train have something wired into it that could go Boom Boom?

"Speak kindly to my children."

Is there too much huff an puff in bitch speak?

Is it not absolutely certain that a right force is closing these guys up?

Before writing this Bitch report, I was thinking about it. When the question of the apparition aspect to the marking came in to my mind heard: "Perfect." The voice was sweet and lovely and of a high pitch. I recognized it as from one the "Drork."

Who are the Drork? They are the signal Beings that handle the communications systems of the Galactic Federation of light in our earth zone.

I first learned of them in 1989, upon discovering their systems in our phone lines. They were tapping my wires and kindly allowing me to discover them. While posting early on the revelation that weap Judah had attacked us with thousands of nuclear weapons in June of 2011, my line was blocked by the pentagon bunch. Drork stepped in and opened my line up allowing me to post the truth of what these dangerous people have been doing with the thousands of nuclear weapons they've filled this planet with.

After removing the block and putting me back online I thanked the Drork, and then heard 2 words from them: "You bet!"

I choose to never offend anyone. I'm a third string operator that has been known to be accidentally stupid, but for certain, never intentionally rude.  I work by myself, regrettably there is no one to proof read what I write. Always looking to remove any harsh, abrasive or irritating or accidentally offensive writing. It could be the wording the other day concerning the rainbow that Father loves  us all, apparently it was written insensitively, and may be interpreted differently that was intended. Intended only with love for everyone, as is what our Father has for us. Please Pardon me my lack of clear understanding and or insight. Thank you..

The plan is to shut the prisons down send the people home and put a bourse card in everyone's pocket to begin our journey into a world with out war or injustice. The issue of skin color is so sensitive, as for three centuries now there has been unremitting hostility placed into this land by weap Judah concerning this. One of His strengths is in confusing people. Using word things in a way to harm friendly relations between people.
````````````````````````
God bless you all, he loves us, he does. Red, yellow, black, white, brown; all are loved equally by God our Father. He made us to love one another.

How many of us still live in a painful situation here in the tyranny that was America? Has there ever been a recorded instance of such a long term mistreatment of people based on the color of their skin? Can we not thank Father for removing weap Judah from our midst and allowing us to get together, straighten it out, and live in peace and perfect harmony?

"You have a limited range, operate within it."  Big brothers suggested to me to stick in the technical field, that's where my strength and real usefulness is.

Just took a look at the word "Shade," and it is apparent that considering whatever the context, in some ways it could have a diminishing interpretation. This was not intended by me. My apologies for the error. Will you forgive me please?....................


ONE pleasant day in the latter part of eternity, as the Shades of all the great writers were reposing upon beds of asphodel and moly in the Elysian fields, each happy in hearing from the lips of the others nothing but copious quotation from his own works (for so Jove had kindly bedeviled their ears), there came in among them with triumphant mien a Shade whom none knew. She (for the newcomer showed such evidences of sex as cropped hair and a manly stride) took a seat in their midst, and smiling a superior smile explained:

"After centuries of oppression I have wrested my rights from the grasp of the jealous gods. On earth I was the Poetess of Reform, and sang to inattentive ears. Now for an eternity of honour and glory."

But it was not to be so, and soon she was the unhappiest of mortals, vainly desirous to wander again in gloom by the infernal lakes. For Jove had not bedeviled her ears, and she heard from the lips of each blessed Shade an incessant flow of quotation from his own works. Moreover, she was denied the happiness of repeating her poems. She could not recall a line of them, for Jove had decreed that the memory of them abide in Pluto's painful domain, as a part of the apparatus.

WE need you labor to begin the long journey home to the land of the free. Please take control of the bourse and let us get about the business of straightening it out.

For the folks that have the opportunity and inclination, if you have the time will please look into these Metra folks and see what they are up to?


January 31, 2013. Instead of Metra, now it is the South Shore railroads turn to have several curious events on their line.  In the last moth or so they've lost the power from a truck raking their electrical lines. Then a train came off the track in a position that blocked 6 other trains in, and they never made the trip from Gary, Indiana to downtown Chicago?


Trying to roll a nuclear bomb into Chicago?